As a car a tech nut, it was a dream come true to have the opportunity to test drive the Model S…especially the P90D model!

I was already in love with Tesla, and this is before ever driving the car. Driving it however, has made me love it even more (who knew that could even be possible?!)

SO, what’s so great about the Tesla Model S?

Everything. Every damn thing. This is not an exaggeration. If you ever get the opportunity to test drive one, you’ll see exactly what I mean.

For me, I was fortunate enough to test one of their more premium models, which is also nicely kitted out. But from even chatting to other owners, some of which had the base model with no extras and even they were raving. #handsdownbestpurchaseevermade

(Trust me, if you ever meet a Tesla owner, they will tell you until the cows come home. Which is pretty darn amazing, and makes you want to be a part of such a genuine community!)

As far as money can buy, Tesla offers something a lot of car manufacturers currently do not and that’s ZERO Emissions.

But trust me, this is not the sole reason you would even purchase one.

For me, I love Tesla because they are understated, extremely comfortable, very safe and a breeze to drive. I’d be lying if I didn’t say I also love the tech.

As far as tech goes, this car gives others a serious run for it’s money. I’ve never been in a more futuristic car, and I sincerely hope I get the opportunity to again.

I was in serious tech heaven.

For this particular model, pretty much everything was adjustable:

From the driver seat profile (which you could SAVE!), to even the suspension. The suspension one, proved to be one of my favourites as I drove the Tesla down some questionable dirt roads and being able to raise the suspension to ‘VERY HIGH’ was so easy and left me sleeping easy.

Additionally this model is ALL-WHEEL Drive which means it can definitely handle off-roading like the best of them. Although, me being precious, this left me very squeamish but we survived.

Other OPTIONS that were included in this car*:

*For more information on the car specifications for the Tesla Model S P90 I borrowed, see here.

P90D versus other Model S variants

The P90D was previously available through Tesla, however has recently been removed, now with the performance vehicles for Model S solely focusing on the P100D.

To compare to the P100D, the P90D was 0.5 seconds slower. Which is like holy wow. To put that in to perspective:

The performance models come with ALL-WHEEL Drive as a standard, and of course Ludicrous Mode (which is what makes this car so ludicrous-ly fun).

The performance models are on another platform of their own, however Model S has a number of other variants based off battery size as well as giving you the option for REAR-WHEEL Drive vs ALL-WHEEL Drive.

HOW did it drive?

It drove like a dream. NOW, I know that sounds cliche. But my word, I’ve never had such a relaxing road-trip in all my life (as a driver). And I drove a total of 26 hours over 4 days. So trust me when I say this, it drives like a dream.

Adaptive cruise control is a freaking life saver, but not only that, the Tesla is smart enough to read not ONE but TWO cars in front of you so as to avoid collision. You can also adjust how many car lengths to keep in front of you at all times. I stuck to 2, but you can go anywhere between 1 to 4. I feel more comfortable with at least 2, but I also found that when you ramped it up to 4, people will tend to continual over-take you, which will you push you back further and further.

WHAT about the tech?

Well, where do I start?! This is by far the most teched out car I have ever driven. So many features. SO MANY. But for this review, I’ll try and simplify them and expand in a separate post.

Of course, I can’t talk about tech by not firstly talking about THE TOUCHSCREEN.

Many people will be familiar with this touchscreen…ya know the 17 inch touchscreen you see plastered across all media channels including the news (when it was first released)!

This is where you can adjust pretty much everything and anything relevant to the car.

These features are paired with the steering wheel control for seamless integration, and also means you can alter settings without looking at the huge screen while on the road. 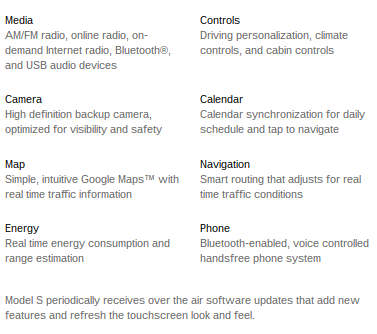 For a more in depth review of the tech, stay tuned for my YouTube video, which shall go live within the next two weeks!

ARE electric vehicles even practical, how do you go about charging?

The great thing about going on a long distance road trip is you get an idea of fuel consumption, and also the number of stops you’ll need to make to charge to make it viable.

I actually mapped out all my stops prior to getting the car to make sure that I wasn’t pushing it to it’s limits. Although this proved to be unnecessary because the car actually let’s you know if you’re going to need to stop to charge.

For example, if I put in the navigation:

Navigation would then insert extra stops for the charging stations, also noting what charge I will be when I arrive, and how long I will need to stay to make it to the next point. Such a nifty feature, which is an absolute time-saver. PLUS, let’s be honest, if you’re doing a road-trip you really should be having scheduled breaks anyway, so it’s not different to if you were to drive a traditional petrol fuelled car, IE you’re going to need to take those breaks anyway!

My Tesla averaged around 515km per full charge, however, this really varies depending on how ‘hard’ you drive that car. For example, if you’re thrashing it around every bend, then you’re going to use that juice up very quickly.

WHAT happens if you fail to get enough charge to reach the next destination OR some unexpected events occur which means you use more charge than intended?

Well, funny you should ask because this is something that happened to me. On one of my days with the car, I planned to go to Hunter Valley. Although there are no Superchargers in HV, the closest being in St. Leonards, I did make sure  that there were chargers available in HV. Unfortunately for me, one of the wineries I went to had their 22KW charger stolen, which meant the only ones that had to utilise were 7KW. Now this is fine, except that I was running on empty with approximately 45km left and needed at least 150km to comfortably head to the St. Leonards supercharger.

Even though I had the car charging for about 5 hours, and had hit the threshold needed to get to St. Leonards, the traffic conditions changed due to a bush-fire, meaning I had to drive the extra long way (not the way Navigation predicted).

This left me freaking out, and suitably. The car realised I wasn’t going to arrive at to St. Leonards at the current speed of 110km/hr, so it alerted me that in order to arrive I needed to drive under 85km/hr for the rest of my trip.

I felt kind of bad about that, because I was driving hella slow, but it is a far better option than being stranded.

Once I arrived at St. Leonards, I plugged her in and went out for some dinner. By the time I got back it was back to 100% and we were able to head back to our accommodation.

The best way to explain the difference for those that don’t speak in voltages, is the time it takes to charge.

From my experience, Superchargers are the ones you want, charging from 0-100% in around 1Hr 30mins (depending on the size of your battery; this was the length for the P90D).

Destination Chargers are less powerful and can range in size. For example, the 7KW estimated 12 hours until fully charged, whereas the 22KW would have taken around a third of that time (3-4hrs).

Home Chargers are even less powerful, but are great for those who want to top up the juice while they are at home, or even those that do small commutes to work everyday and aren’t looking to do long road-trips.

Range per charge in will vary on a range of conditions, including weather the car is running A/C & even the outside temperature. You can also check this out on the Tesla website with a very handy infographic!

DOES it cost to charge?

Currently, Superchargers & Destination chargers are free to use, but this may change in the near future. However, if you own a Tesla vehicle prior to January 2017, apparently this may not affect you.

Tesla has noted that the cost is just to reflect energy cost, and not for profiteering; which is good to know.

I love that Superchargers are free currently, but I can understand why they may need to cover those costs eventually, especially with their rapid expansion of Supercharger network globally. (This s*** ain’t free!)

…Who do I approach about selling my liver?

I already loved Tesla beforehand, but know I’m left wanting one even more, for so many reasons.

Thankfully, Tesla is growing, which means more options are coming available, especially more affordable options, which appeal to me, someone who is still studying and working and could only dream of dropping $110K down for a car (I’d rather do this outright, but each to their own).

That being said, a Tesla Model 3 is definitely within my reach going for approx US$35,000.  You can also register your interest by putting down a $1,500 deposit and you can reassess your situation closer to production (in about 2-3 years).

Now unless I suddenly inherit some mysterious money from a Foreign Prince, I may have to wait it out for a Model S.

Thank you so much for reading. This was a big one, but it doesn’t even make it close to explain every awesome detail.

Stay tuned for my YouTube video, which will go through some of the amazing software features and in more detail.

What are your thoughts? Is EV really for the future?

Lover of cars, food, fashion, technology and travel. Based in Geelong.

Hi. 👅⁠
Trying to figure out how to get this sports car out of here without anyone noticing... 😛😂😭 ⠀ #AMGGT
One of my favourite locations in Melbourne, let alone on Collins St. 🥰⠀ The view from the Rialto Towers is incredible, and it’s even better matched with amazing food and wine. 🤤⠀ A relaxing way to end the afternoon after some shopping. 😉👏⠀ Swipe right for some of the views, inside and out. ➡️🤯 #StCollinsLanePhoto @stcollinslane
Exhausted but still here. TGIF. 😅⁠⠀ How are you planning to spend the weekend? 😈⁠