As far as Bentley’s go, this is just as luxurious and kitted out.

I was very intrigued to drive this vehicle, especially as we are starting to see more luxury car manufacturers add SUVs to their vehicle lines.

What interested me the most was given their rich history of over 98 years, this is their first ever diesel. Not only that, the lowest CO2 output of any of their range. Plus, I’d be lying if I said the performance of this vehicle didn’t interest me.

I had only seen one Bentley Bentayga in the flesh, prior to my review. I remember I couldn’t believe my eyes, but it was passed me quicker than I could get another look in.

I was lucky enough to enjoy this vehicle over the Easter break, and what better way to enjoy a car like this than to visit the Yarra Valley (Marysville, Healesville), drive on the Black Spur and also visit some picturesque wineries; right at the start of the beautiful Autumn season.

Like with any of the cars I review, there is so much to talk about, but for this review I will be covering: design & performance, technology, practicality & sex appeal. 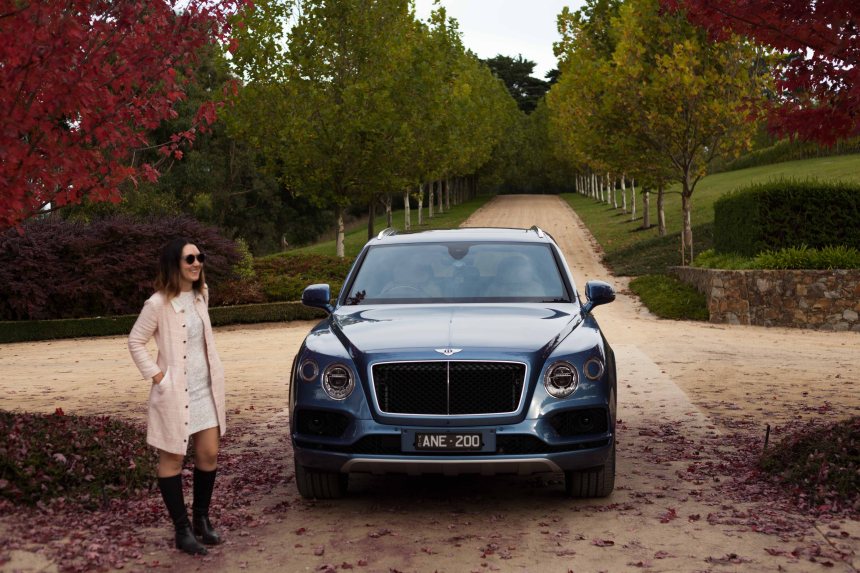 The new Bentley, ‘twin-quad’ exhaust tailpipe design, another reminder of the new engine specification, as well as the V8 diesel badge which is located in the lower front door edge.

On top of all that, the tank is capable of over 1000km of travel. This screams perfect for roadtrips. Especially in Australia, when we have such spread out Cities and States- to have a tank with 1000km capability is something I wished more cars I had.

As for the overall design of the vehicle, I personally think it’s beautiful. For an SUV of it’s size, I think it manages to hit the nail on the head while maintaining it’s signature Bentley styling cues such as the bold black matrix grille (w/ chrome surround and central bar) rounded lights, and body curvature.

Not everyone will agree on this, but at the end of the day, it’s a Bentley and I guarantee it will stand out either way. 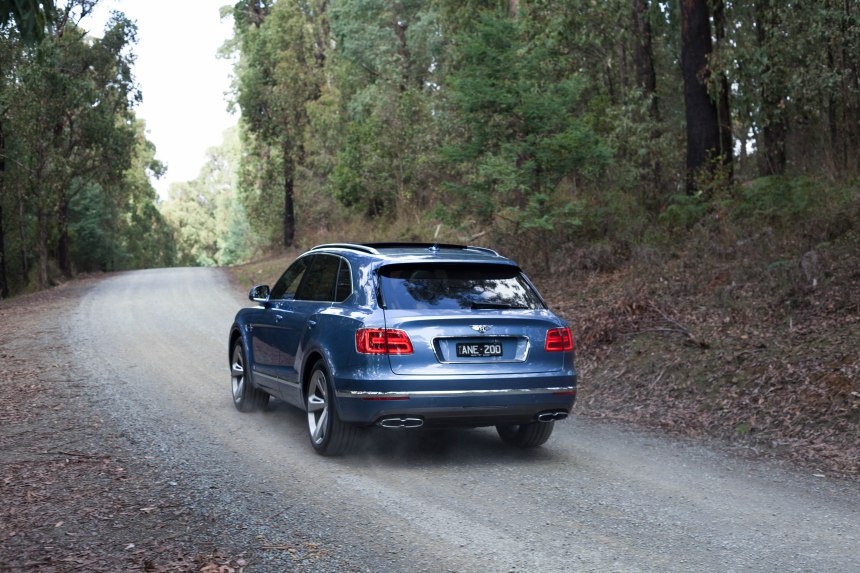 A Bentley, wouldn’t be a Bentley without Mulliner– it’s the department that makes every Bentley ‘one in a billion’.

They can customise anything, from the stitching to the seatbelts to even the carpet.There are 17 standard paint colours (90 extended or bespoke on request), 15 standard hide colours and 8 standard veneer species.

For the Bentayga, an additional hand-selected veneer option was introduced called, Liquid Amber finish. These veneers are made up of 15 pieces, which are shaped by their artisans and lovingly fitted to each Bentayga.

All is just mind-boggling, but also consistent with Bentley’s trademark attention to detail.

Although you are getting so much luxury with Bentley, they also don’t hold back on the tech. Both safety technologies and convenience technologies are well thought out, and highly advanced offerings. This car is perfect for all drives, and especially for your long ones, with the enhanced driving range potential of over 1000km.

Infotainment features were vastly impressive, and sure to help provide hours of entertainment as well as assistance along the drives with 4G connectivity and hotspot capabilities.

The sound system as well meant that that our road trip was filled with great sounding tunes, and the 2 USB slots meant we could charge our tech on the go.

There is a bit of a theme with luxury SUVs, but one that is definitely worth the difference.

I love customisation. I love the idea of being able to make something truly yours. One of kind to suit a one of a kind person. In the Bentley, this is no difference, you have the ability to customise the interior (above) and even the tech.

You can even customise the drive mode. Something I haven’t seen before in any of the cars I’ve reviewed. So for example, if you have a certain suspension setting you want and outputs, the Bentley owner can take their car in to Bentley, explain what driving needs they require, and then this is programmed to the ‘Custom’ setting on the drive-mode wheel.

How cool is that?!

The customisation options doesn’t start and stop with driver settings. Even as a passenger in the rear, you can adjust your seat heating, the volume of the music and check things like drivers speed- with the use of touch-screen remote integrated on the back of the centre console (also removable).Just because you’re in the backseat, doesn’t mean you miss out either!

A common misconception with luxury cars, is that you are paying more for the status and appeal for the vehicle and less for the technological features.

This simply is not the case in the Bentayga.

Even though the interior is so luxurious and handcrafted, they have not left out the most important thing: driver safety.

The Bentayga is kitted out with Driver Assistance (a suite of advanced tech, including head-up display, night vision, park assist, traffic sign recognition etc), plethora of airbags plus crash detection and mitigation systems.

You can have your cake and eat it too. 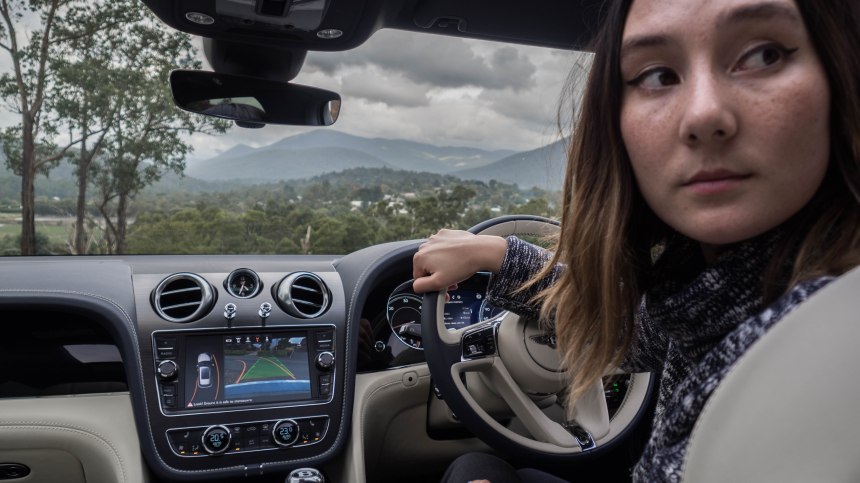 It goes without saying, but when you’re buying an SUV, you’re clearly looking for something that’s a bit more practical than say you’re 2-seater or coupe… something that can handle your towing, occasional off-roading (if you’re into that), and carry all your gear for your weekend adventures.This SUV is no different. Sure, it’s extremely luxurious, but it’s well and truly built to handle your SUV needs and has enough kick behind it, that it can handle any of these tasks with ease.

This feature, I didn’t even realise what it was until an old friend came for a winery tour with myself and my photographer. As we were getting photos, he turns to me and says, ‘you know you can lower the boot’. To which I responded, ‘you can, what?’. Before I knew it, he opens the boot, and presses the button.

You can adjust the height of our vehicle to make it easier to put larger, awkward or heavy items in and out with ease.

A unique function I had missed, but savoured ever since!

Plus the car is extremely spacious, with the boot large enough to handle even my excessive need to bring everything on a trip of way, that plus all our tech gear (that’s three suitcases, a drone, backpack and even a car cover).

You barely ever see this car on the road. I have so many friends that 1) didn’t know it existed, and/or 2) had never seen one.(UNLESS, you live in Toorak or an area similar to- which I do not.)

When I stopped at a location, people would do a double take. Mainly for the car, but also I think seeing a 20-something female behind the wheel, would freak you out a bit too.

There was one winery we went to in particular, where people were stopped right in front of the car and had a full commentary going about the Bentayga, without even realising that the driver of the car was standing right beside them.

Bentley’s are so recognisable, and when you have an SUV, it’s even harder to hide. One thing is certain, if there is any car that will get you a lot of looks, it’s one that people have never seen before.

Price aside, the Bentley was beautiful. So many innovative features (many I didn’t have the space to include), and the detailing of the handcrafted interior were to die for. Everything about the car oozed luxury and innovation.

The car was immensely practical, while also maintaining the fun behind the wheel.

Just because it’s a luxury SUV doesn’t mean you can’t have performance fun, plus get some serious practicality with it.

Bentley’s are fantastic because they push the boundaries of what a car can be, while also making it more of a lifestyle decision.This appeals to me.

Even though I love cars as they are, I also seen them as part of the journey. Sure they may get you from A-B, but they also go with you on your adventures. Whether that’s to the beach, or a weekend getaway or even just to work.A car to me is more than just an A-B, it’s a lifestyle.

For more information on the car I reviewed check out Bentley Bentayga. 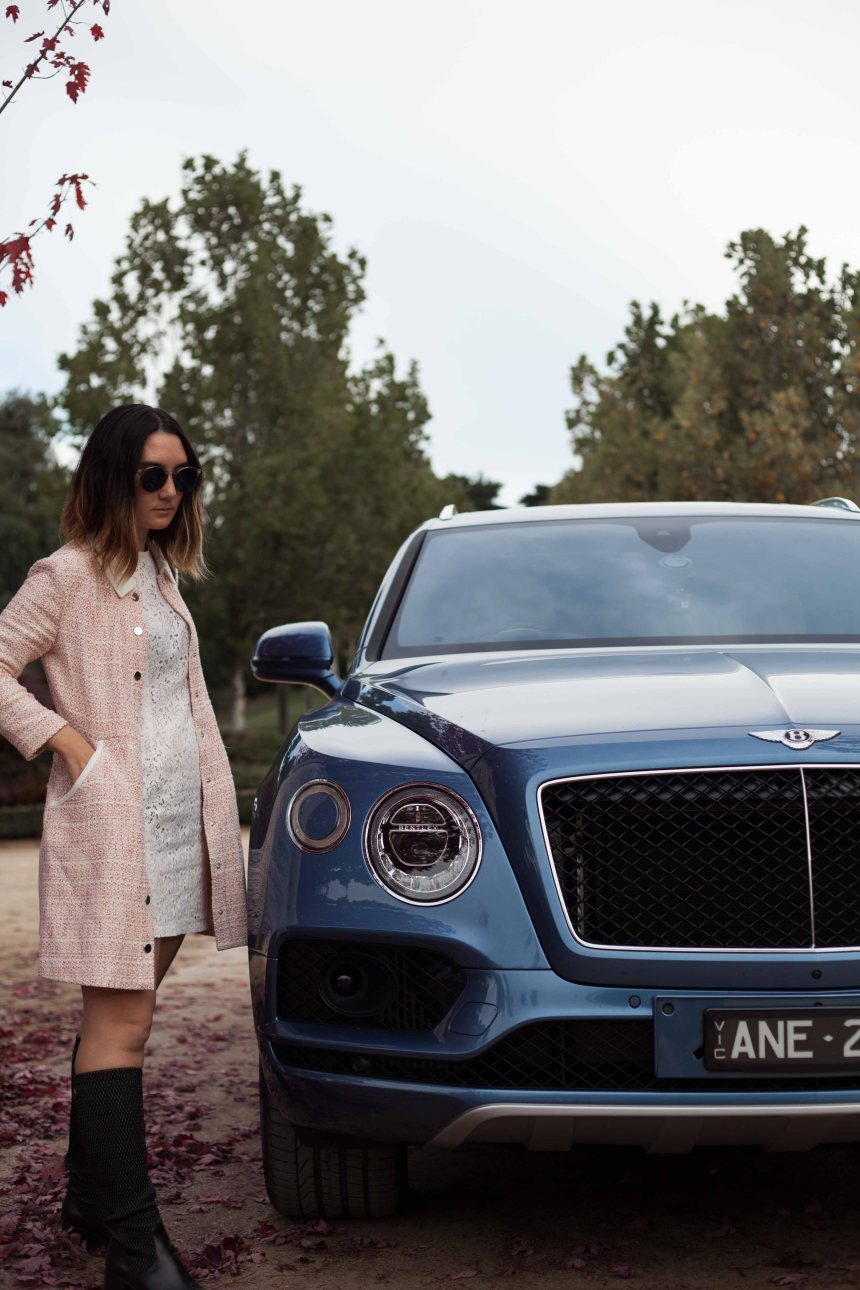 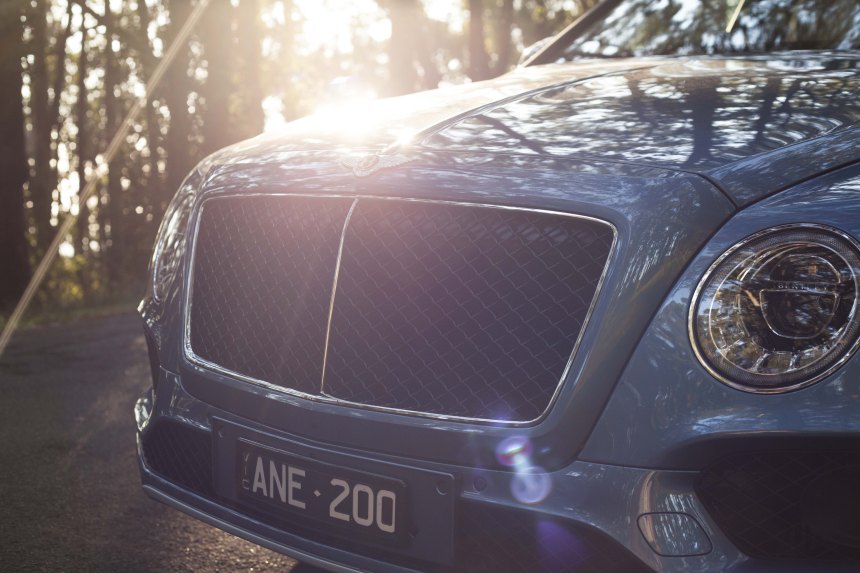 Lover of cars, food, fashion, technology, interior design and travel. Based in Geelong.